The Summer of Love will be a bit different this week. For this review, the final arc of the series thus far, I’m going to be throwing everything involving Sairaorg and the Rating Game down in the “Additional Thoughts,” section. That isn’t a sign of it’s quality, it’s only because I want to devote most of this post to the other half. I’ve hyped it up, I’ve planted my flag in the ground. I’ve said it is the greatest moment in the ecchi/harem genre ever put to page. Join me after the cut as we take a look at the final arc of High School DxD Hero, the final arc of the anime: The Rating Game Arc.

“Sometimes, when you look at us, your eyes look very scared.”

The biggest issue I have with the harem and ecchi genres is that too often then not there is never really any conflict between the characters. Oh there is plenty of comedic conflict and antics, but rarely if ever is there genuine real disruption between the girls and the male lead. The Harem genre frankly has never really been interested in taking the characters in that direction, preferring to maintain a status quo of the fantasy of all these girls in love with one guy. Additionally there is never really a moment in a harem where the main lead actively sits down and takes stock of his situation, his feelings towards the girls and how this life might actually work. It’s part of the fantasy, because the truth is if you apply any real world logic to a harem anime, the entire premise falls apart. There must be a suspension of disbelief, a checking of logic at the door in order to enjoy this genre and there is nothing wrong with that. However if a series does that, then it can shoot it into new heights. High School DxD, throughout all four seasons has done much work in laying down track for the central conflict between the two main leads: Issei Hyodo and Rias Gremory, which after dozens of episodes finally comes to a head in this final story arc.

To understand the conflict that is central to the story arc, it is important to look back at the character of Issei Hyodo and ask “why doesn’t he ever fuck any of these girls?” which the reasons (aside from the real life one of editorial mandate) have been explained throughout the entire series. Issei’s initial relationship with Yuma/Raynare, the fallen angel who killed him and set the wheels in motion to have him saved by Rias is a character that, despite her relatively limited presence in the story, had a massively emotional and lasting impact on him. It is important, vitally so, to remember that Issei is a teenager in the throes of his adolescence and puberty. The fact that a girl as cute as Yuma would show any interest in him, a boob and sex obsessed stupid kid, is massive. Simply put, getting his first girlfriend is the biggest thing has ever happened to him, ever.

To have that blow up in his face, to be betrayed so utterly, to be mocked and derided for his date, which he spent so much time planning and preparing for, and then literally KILLED leaves a emotional scar on Issei that until this final season has never had a chance to heal. Coupled with what Raynare does to Asia and Issei’s violent reaction to it, the entire episode fundamentally changes Issei’s view on emotional bonds with women. As the quote at the start of this said, Issei developed a fear of women, and coupled with his already present teenage insecurities, only make the problem worse. He is a boy afraid to get close to the women, afraid that if he lets his guard down and allows himself to get close to these girls, then he’ll get hurt again. He’s afraid that Rias, Akeno and all the others don’t really like him, but they are just being nice. As much as Issei talks a big game about loving boobs and women, he is at heart a scared teenage boy who doesn’t know how to accept that all of these girls might truly actually love him.

His relationship with Rias is the second part of this conflict. As we’ve seen in every season before this, Issei has only ever called Rias by her title of “President,” a sign of respect and authority to the head of the household, his senior student and women he admires. He keeps calling her his throughout all the events of the previous arcs, through saving her from Riser, from meeting her parents at the house, through all the kisses, the hugs and playful teasing, Issei has almost always, ALWAYS called Rias ‘President.’ He does this not because he loves her, which he does, but because Issei does not know if Rias truly loves him back, and that he again, feels that his status as a common devil, a man LITERALLY picked off the streets shouldn’t be with someone of such a powerful background.

Rias meanwhile has caught onto this and has shown throughout the show a growing frustration and uneasiness about it all. Despite her place as head of the peerage, it is Issei whom she loves the most and desires a true real relationship with him. Yet she has to contend with the other girls who begin to fall in love and throw themselves at Issei any chance they get. From the calm Koneko, the obsessed Xenovia, to the devoted Asia, and the sultry Akeno, all of these girls manage to form bonds with Issei that go beyond their titles and ranks among the family. He calls them all by their names but not Rias, never Rias, and we see that she begins to torment her.

This all comes to a head in this final story arc where, after a conversation with Issei and her mother, who pretty much tells Rias to just “get on with it,” confronts Issei in the sauna (and the only time in the series where the ecchi gets to the level of Shinmai and HybridxHeart) and not only offers herself to him right there, but actually pushes him down and forces herself on him. However unlike in the first season where Rias did the same thing to get out of her marriage to Riser Phoenix, this time is done with a genuine desire to be with Issei, she wants to have sex with him, she wants to be held, and touched and adored by the man she truly loves. However all of Issei’s issues, his trauma with Raynare, his respect for Rias, and his teenage insecurities all come to a head and at the moment of truth, he calls Rias ‘President,” to which she angrily reacts and storms off, asking him “What am I to you, Issei?” 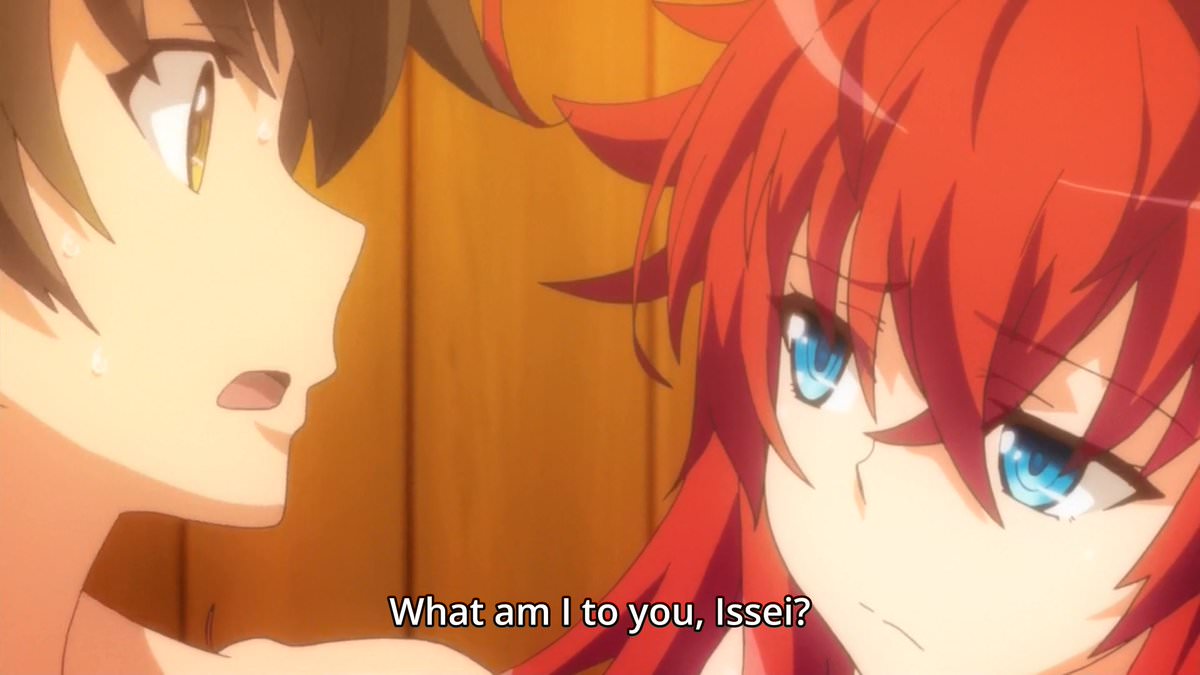 This only gets worse where in the same episode, after a conversation with Ravel’s mother who asks Issei to “take care of her,” does Rias finally reach the limits of her patience. After asking what Issei thought of all the other girls and then her, and once again Issei responds with ‘President” does Rias snap and tearfully storm off, and when Issei tries to follow her, Akeno and the other girls stop him, berating him for his attitude and disrespect towards her feelings. However it doesn’t end there, and here is where we get to the best scene in the series. Issei, alone on his own in a room takes the time to sit down and have a real honest to god conversation about how he feels towards Rias and entertain the idea that she might have feelings towards him. It is here we were we see him begin to lay out his feelings, his fears of rejection and his hesitancy to call Rias by her name.

And then after all of that, Akeno, Asia and Koneko who despite (rightfully so) siding with Rias over him, realize that they need to sit Issei down and confront the other issue on his mind. Pulling him close, the three other members of the A-tier harem finally tell Issei the truth that he’s been running away from this entire time: that what happened with Raynare tore him apart, that her treatment towards him and Asia left a wound so great that he is unable to understand his feelings and accept that what he has is real and true and good. It is through these girls, whom Issei has helped and saved several times, that he finally accepts what happened, and puts the past behind him, promising to them and himself that he will confront his feelings, have more courage and embrace the love, kindness and devotion that Rias and everyone else gives him. In this one single scene, the girls of High School DxD let Issei simply know: “It’s OK to want this, we want it too.”

This is what sets High School DxD apart from other harem and ecchi anime. It is these scenes, this moment of true character self-reflection, honesty and real conversation that is the greatest moment ever put to page or screen in the harem and ecchi genre. I have watched several harem shows, but it is High School DxD and ONLY High School DxD that has this moment where the main characters sit down and discuss the problem and solve it. It is these scenes that prove to me, beyond a shadow of a doubt, that the Harem and Ecchi genre are more than capable of producing work that can thoughtful and serious. Seasons upon seasons of careful foreshadowing and build up, of hints both subtle and evident, of character conversations and moments both comedic and serious, they all work towards these scenes and the payoff in the final few minutes of the series, where Issei confesses his feelings to Rias is the best payoff to not only High School DxD Hero, but the entire four seasons of the anime. Some people may disagree, or have other examples from shows that also do this, but The Summer of Love has been concerned with one overarching question: Is High School DxD the ‘Great Work’ of the Ecchi and Harem Genre? I would say yes, and I would point to those scenes and the seasons of groundwork laid as proof of that.

The Rating Game arc of High School DxD Hero is one of the strongest of the series and the best way for the anime to close out. If this is all we end up getting, than High School DxD finishes it’s run on the strongest possible note it can. The entire fourth season overall is a massive improvement over the third and everyone from the animators, the story, and the characters step up to the plate and deliver, and it’s made even better by being able to watch this along with the last three seasons. This is truly one of the best arcs around guys, and I highly suggest you give it another look as soon as you can.

The Summer of Love will have its final entry next week, with a wrap up post discussing my thoughts and feelings on the entire series, so don’t miss it.