Don’t @ Me returns! Once again I have risen from the depths of whatever anime induced coma I have found myself in to drop down some hard facts, opinions and thoughts on the anime scene. This week, well everyone else is talking about it, so I’m gonna do it as well. Let’s pull up a chair and discuss fanservice. Leave your hate in the comments below.

`1. I love fanservice to death. I absolutely 100% adore it, the boobs, the butts, the thighs, all of it. I do truly believe that fanservice is a vital and important part of the anime industry, and that it has kept the art form afloat. Sex sells, boobs and butts sell, cute girls sell. It’s the hard honest truth. You have to accept that. It’s going to be here, it’s always been here, and it is always going to be here. Anime fans are not NOT going to accept the moral grand-standers trying to force it out of the medium.

2. That being said, it is also important as a fanservice fan, to understand that loving something doesn’t mean it gets a free pass. Fanservice, like all things, is capable of making mistakes, having flaws and being damaging to shows, or even the industry when it isn’t used correctly. Loving something doesn’t mean you 100% accept it all the time. You have to be logical, you have to be fair, and yes, sometimes you have to be critical. Which brings me too…..

3. The Tamaki stuff in Fire Force doesn’t work. In fact it is a perfect example of the worst kind of fanservice: shoved into scenes where it doesn’t belong, and actively detracting from the plot at crucial moments.. Even ecchi heavy shows like High School DxD are smart enough to know to put the boobs and butts aside during serious moments. Fire Force (and this is the real controversy, not that BS stuff at the start) has failed in the regard. I have to call it like I see it guys.

4. The panty shot feels like it’s being slowly chipped away in the anime world. Some won’t miss it, but I kinda wish it would come back. Date A Live is a great example of this, there are like TWO of them, then it never ever shows up again.

5. If you are going to front load your anime with great fanservice in the first two or so episodes, then never have any again, then your just a meanie. Boo to you sir!

6.  “Fanservice and Ecchi shows are just for the male gaze, and never tell any good stories at all.”

7. So we get to see nips in the Code Geass recap movies, but not a single full boob shot during Heaven’s Feel Lost Butterfly! Truly we live in the darkest timeline. It’s still one of the best examples of a perfect anime “franchisee film” but damn I wanted to see dem nips!

8. You don’t need fanservice to tell a good compelling story. Several of the best anime and manga off all time don’t have it, but good fanservice is always welcome. Naruto desperately needed some fanservice, but the story was solidly told without. But seriously, you could have showed a LITTLE more skin.

9. If you aren’t already, go watch Sydsnap on youtube, who is a great female voice who talks about fanservice and ecchi in a supportive and fun manner. Her work is hilarious and a welcome breath of fresh air. I believe it important for people to be empathetic and try to “put yourself” in the shoes of fans who might have different views, but it’s good to see a female voice, one of many, be supportive of fanservice. 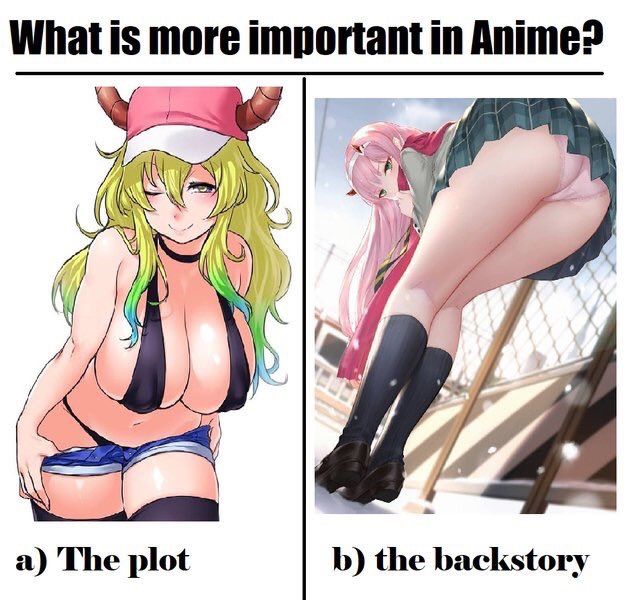 Plot is VITALLY important, but I always love a good meaty backstory…..

7 thoughts on “Don’t @ Me: Ten of my Anime Opinions: Fanservice Edition”