Our look at Sword Art Online continues! The second season is now in the bag, which means it’s time to talk about it! I’m going to be doing things a bit differently this time though. Since there are two arcs, and Calibur really doesn’t have much to say. I’m going to put my thoughts down at the bottom in point form, and devote the majority of this post to the second. I was tempted to not even write about the first story arc, but I wouldn’t be doing my due diligence if I did that. Either way, join me after the cut as I discuss the final half of the second season of Sword Art Online: The Calibur and Mother’s Rosario Arcs!

Ever since I decided I would take a look into everything about Sword Art Online, it was this arc, Mother’s Rosario that was in the back of my mind. It is the arc beloved by almost every fan, and the story-line that even the most vocal of haters admit is good. Knowing that, I kept my expectations in check and dived head first. Once I got out on the other side, I can tell you that, while it isn’t MY favorite arc of the series, it absolutely is a great one. The story is again a personal one, as we follow Asuna as she heads up a rumor about a legendary swordsmen who has defeated even Kirito. When she finally crosses blades with the bubbly and headstrong Yuuki. Asuna suddenly finds herself wrapped up in a friendship that will define her just as much as Kirito has.

Rosario is at its heart, a story about choice and legacy. Yuuki, a girl whose body is ravaged by AIDS (and my deepest respect to Kawahara for having the courage to make her suffer from a real disease, not made up ‘anime cancer’), is slowly approaching death and with her fellow terminal guild-mates, wants to ensure that she and her friends are always remembered, that they truly actually lived their lives. Kawahara pulls no punches when to comes to Yuuki’s story, and it is here where his true talent as a writer comes forth. Yuuki’s journey from achieving that legacy, to being able to have a semblance of a normal life, to her inevitable finale hits you exactly where it is suppose to and exactly the way it was meant. Reki Kawahara is excellent at making all the emotional points land, from impact of Asuna’s discovery of her disease, to the brief glimpses of hope and normalcy, to the tear-jerking but also somewhat peaceful and happy ending. Kawahara hits nothing but homers from start to finish, and Rosario serves the crown jewel to how far he has come as a writer, and the sheer talent he actually has when Sword Art Online focuses on what always made it great: Characters and relationships.

Asuna, who up ever since the end of Aincrad has a supporting role in the series finally comes into full force here, and Rosario is at its heart: her story and she remains the central focus throughout. So much as been said about Asuna as a character, both on this blog and among so many fans, but it is Rosario that finally really puts her picture together. There are many viewers who believe that Asuna should be just the same as Kirito: badass, capable, and throwing down with the baddies as much as possible. They want her to a #girlboss, a tough as nails women who can reassure viewers insecurities and stand on her own two feet. And while even I admit that she could’ve done a bit more in the previous arcs, Rosario finally showed me that no, that is not what Asuna is suppose to be.

Asuna’s story and the central crux of her character in Rosario and in Sword Art Online is about choice. The daughter of a rich and important family, the child of a mother who worked tirelessly to rise above her social status. Asuna has struggled her whole life with forging an identity for herself to escape the strict path that life has set her on. Through SAO and her relationship with Kirito, we see that she begins to start making that identity, but it is in Rosario and the time spent with Yuuki that Asuna is able to finally seize the reins of her life.  Instead of the pre-packaged box that her mother (and the viewers) have decided to she must fit in to, Asuna instead decides that her life is joined forever with Kirito’s and that the fantasy they had shared in Aincrad, the quiet and peaceful life with Yui is the one that she wants. Through the examples of determination and perseverance of Yuuki, the girl whose entire life has been one of pain and death. Asuna discovers the inner strength and courage to confront her mother, and the expectations of both her family and the audience.

And in the end she fully chooses her own fate and hold of her own destiny, and if that future is not acceptable to either her family or the viewers? Then to hell with them, because it is the life that SHE chose, fully and freely. Some people may not like that, they may demand that Asuna has to be a certain way, to assure and reassure certain beliefs and ideas, but after watching Rosario and the previous arcs, it is clear that Asuna was never meant to be that type of character. While Kirito is struggled with loneliness and later guilt, Asuna has always been a woman trying to figure out who she was, and what she wanted. She is a damn good fighter,  and can throw down as much as the next guy, but slaying the dragon and saving the day was never her endgame, and this time in the spotlight brings her character arc to a full and satisfying conclusion.

In many ways, Rosario feels like an epilogue to the series so far, a capstone to everything that has happened. No longer are Kirito and Asuna the stock archetypes they were at the beginning of the series. Instead the events of Rosario and everything that has come before has forged them into fully realized and fleshed out characters. People who have suffered loss, heartbreak, triumph, defeat, love and sadness. Kirito is no longer (or ever really was) the gary-stu blank slate, and Asuna no longer the archetypal tsundere love interest. They have fully come into their own and as they head into the next season and beyond, I find myself fully invested in their continued journey, and truly wondering if the rabid haters of Sword Art Online have actually honestly watched this series cover to cover.

The Mother’s Rosario Arc of Sword Art Online is not my personal favorite story arc of the series, but I can’t deny it’s impact and it’s effectiveness. A deeply emotional and personal story of choice, legacy and death. It is an absolute triumph, with everything that makes Sword Art Online a truly good series baked in. It was best way for the second season to go out on, and the capstone on what has been a truly excellent second outing for the series. I hope you have enjoyed reading this as much as I did writing it, and I hope you’ll join me next time as I give my thoughts on the second season as a whole. 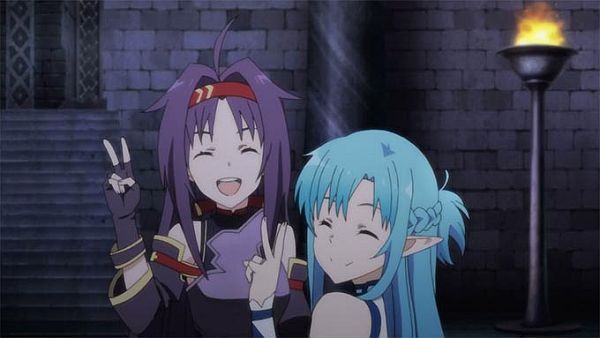 Thoughts on the Calibur Arc