Look, I’ve made my peace with this show. But it doesn’t matter, cause the fanservice was never the problem in the first place! Case in point, this lovely piece of ass! The Bi-Weekly Booty is Yuki Nonaka from Shinmai Maou no Testament!

Once again I’ve been lucky enough to sit down with my fellow bloggers at Ecchi Hunter to discuss an anime we’ve both watched. This time we are discussing *sigh* a series that is no stranger on this site: The Testament of Sister New Devil, or Shinmai Maou no Testament.

Now I’ve made my thoughts on this series very. well. clear, but this conversation was a good chance to sit down with my good friend Lynn and have a real pow-wow on the series. 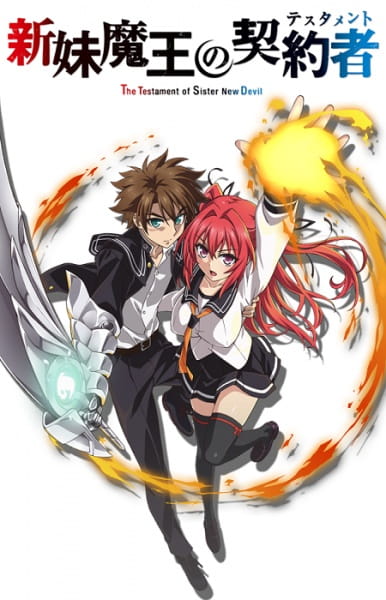 In the summer of 2018, I got set up on a blind date with a girl, sadly I struck out and nothing came of it. This of course happens, but I was bummed out enough that I needed something to rid my sorrows. Earlier that year I had recently come back into the anime world after several years “in the wilderness,” so I decided that a good ol anime binge-fest was what I needed. The binge I chose was a buffet table of harem and ecchi anime. Date A Live, Shomin Sample, Majikoi, and more. Over the next two days I shut myself away and just enjoyed the onslaught of comedy and harem hijinks that High School DxD had caused me to fall in love it. At the end of the binge-fest I came across another series, one that I had been told about, but I had somehow waited to the end to watch.

That series was Shinmai Maou no Testament, or The Testament of Sister New Devil. And I fucking hated it.

I disliked it so much, that hours after that final episode of season one rolled, I was literally pacing back and forth trying to figure out my feelings. How could have something I should have loved turned out so bad? How could a show, with all the ingredients for a home-run hit, just completely shit the bed? Had I just reached peak harem? Had my binge caught up with me? Or was I mad that it wasn’t another High School DxD?

This provided the catalyst for me to create Shallow Dives in Anime. For months I had been humming and hawing over creating a anime blog where I could get my thoughts on, hone my writing skills, and just have a project to work on. It was Shinmai and my anger towards the show that finally made me bite the bullet and do it. On September 9th 2018 I threw up my first post: Indulgence, Self Reflection and Shinmai Maou no Testament. A few months later in December, I published my second post examining the character of Basara Toujou called Shinmai Maou’s Basara Toujou: Anime Blue-Balls, Sexual Independence and A Moment of Greatness

Over year and the dozens of posts on dozens of different anime, I had dropped references to Shinmai Maou, and my dislike for it, always in jest and so much so that it became a running gag. Yet as time went on and it got closer and closer to a whole year of blogging, I realized that I would need to do something to celebrate. I have always believed in second chances and watching something again with your “fan expectations” set aside. Part of me wanted to go back to the series and see if my hatred had dimmed, or if I had misjudged the series because, as I said in my first post on the series, didn’t indulge my personal tastes. I thought it was the right thing to do, the mature thing to do, instead of just sitting in an echo chamber of self-eating hatred of something that frankly, isn’t really important. So I did that, I watched the entire first season again.

This is Shallow Dives in Anime, and welcome to my One Year Anniversary Post.

This is my re-dive into Shinmai Maou no Testament.

((You know what this show is. NSFW shit coming up))

END_OF_DOCUMENT_TOKEN_TO_BE_REPLACED

A few days ago I dropped a little preview of what I’ll be doing for my one year anniversary of Shallow Dives in Anime, which is coming this September 9th. However I also thought I would take some time to make a post explaining my reasons for doing it, especially since I’ve been vocal that I would NOT be going back to revisit this series, that I didn’t WANT to go back to this series, yet here we are.

To celebrate my one year anniversary of anime blogging. I will be revisiting and re-reviewing the very first anime series I ever blogged about: The Testament of Sister New Devil, or Shinmai Maou no Testament.

But why you may be asking?

I believe in second chances, I believe that sometimes we as viewers often put too much baggage on the shows we watch, expecting them to pander to our personal views and tastes, and get upset and angry when they don’t. One of my guiding principles in life is that sometimes we need to accept things for what they are, not what we want them to be. I made those thoughts clear on my very first post on Shinmai Maou when I started this blog, and I still stand by those thoughts.

However that was over a year ago, and during this time I think I have grown as both a blogger, consumer of media and as a writer. Since that time I’ve watched dozens of different shows, harem, ecchi and not and see various attempts at creating pieces of entertaining anime. Some have been successful, and others have not, and there have been a few clunkers that have come out and made me go “hmm..was I too hard on Shinmai? Was I just pissed off cause it wasn’t like High School DxD?”

I do not think it is fair, either to myself, my readers (all like ten of you,) and honestly, to Shinmai Maou no Testament itself, to seal myself in that single opinion I wrote a year ago. I want to go back to the series with fresher eyes, more experienced eyes and with a cooler head than how I felt even just a few months ago. Just like with In Another World with my Smartphone, I do believe this series deserves a second, more experienced look.

So on September 9th 2019, I will present to you my full review of all 12 episodes of the first season of Shinmai Maou no Testament. I will discuss what works, what doesn’t work, and I will re-examine my complex relationship with this series. I will also be returning back to the second post I did where I discussed, what I thought, was the series single best moment. Will the series still be a flaming pile of shit? Quite possible? Could I possibly have misjudge it and find out I actually like the series (not just the fanservice?) Also possible. Either way, while I am NOT looking forward to watching this series again, I am looking forward to finally putting this to rest, one year later.

With all my love and respect to Crow, Matt, Lynn, Scott, Karandi, Yomu, Pete and Irina for making this year of blogging so fulfilling and enjoyable.

Welcome to Don’t @ Me, where like my review on Bible Black, I actually commit to doing something I said completely in passing. Almost every week I drop down a hot nugget of raw, uncensored and to the point anime opinions. This week we deliver another 10 of my general thoughts on anime. Check it after the cut.

END_OF_DOCUMENT_TOKEN_TO_BE_REPLACED

I need to re-review Another World with my Smartphone, because I think both myself and everyone in the anime fandom has not given that show it’s due. As more and more Isekai animes come out, it only raises the bar on a show that everyone gave a bad rap to. It’s a bloody MASTERPIECE compared to some of the stuff I’ve watched.

Right, let’s take a dive into Death March to the Parallel World Rhapsody.

END_OF_DOCUMENT_TOKEN_TO_BE_REPLACED

A simple blog post today. Here are my top ten favorite posts that I have written in my time so far on WordPress. I’m really proud of the points or words I made in these posts, and they remain tender favorites. Check them out on the links provided if you are interested!

9. How NOT to Summon a Demon Lord: Simple, Superb, Successful.

7. Fatevember: Fate Stay Night’s Rin Tohsaka: The Tsundere with the Iron Will.

It is easy to hate on things, but it is even harder to admit that something you hate or dislike actually has some redeemable qualities. While we can dismiss pieces of art and entertainment as bad and never think about them, it is the work that is flawed or has a moment of greatness that leaves you with something to chew on. Hence despite my heavy dislike of the series, there is one scene in Shinmai Maou no Testament that stands out as a shining example of possibility and potential. However, before we talk about the said scene, we need to take a small detour and speak out two things: Anime blue-balls, and Shinmai’s Basara Toujou. Let’s get into it after the cut.

END_OF_DOCUMENT_TOKEN_TO_BE_REPLACED

Alright, fuck it. I’ve made so many references to this show before, that I feel I owe to my viewers to explain myself. This is not so much a ‘Shallow Dive’ but more of a personal unloading my cathartic rage about how I feel, one forged from months of thought, self-reflection and just…ugh… After the cut, it’s time to talk about Tetsuto Uesu’s Shinmai Maou no Testament, or in English: The Testament of Sister New Devil.

(This is a reblog of my first ever post here on Shallow Dives, with a little bit of additional information and thoughts. Totally not doing this because I have more viewers now and I want people to see what I view is my best piece of writing.)