About a week ago, I sat down with Irina to talk shop on Tower of God, a Crunchyroll original anime that’s been the talk of the town last season. We had a good back and forth, and, while the first part is up on Irina’s own blog, I’m hosting the second part. Our conversation picks up right after the last bit, so I hope you enjoy the rest of this discussion! Let’s get into it after the cut.

((Dewbond is Italicized, and Irina is normal font!))

Naruto holds up really well. I bring that up, because that was the thing I instantly thought when Tower of God started to get going. Granted, I’ll take that over another romp through an academy or high school, but I couldn’t shake that feeling. I think in a way though that is best, because it allows the story to introduce multiple characters at a time.

You are right that this is a story that absolutely wants to have a mystery and slowly peel back the layers as time goes on. Even now, with the first season almost done (and who knows if they’ll get a second) we barely have any answers, and just more questions. Considering how far along this story actually is, I am sure we will get those answers soon, but a lot of what I’ve seen so far feels like a prologue.

Like you said, the characters themselves have unique personalities and traits, most notable Rak and Khun, as they seem to be the key supporting characters, but even the others each get their own moment in the spotlight. But again, it feels very much like a slow build up, and perhaps in later arcs, the show will go deeper into their stories, because most of them feel either one-note, or have had their surfaces barely scratched. Out of the entire cast so far, who has stood out to you the most Irina?

That’s a tough question. Both princesses of Jahad, well the one princess and Anak both had their tragic backstories revealed and it’s fun to see how reach of them has hardened their personality and built up emotional walls in different ways as a self defense mechanism. Of course there was the painful vulnerability and desperation that drove Ho, the last member of a now completely extinct race. Just for the milestone he represents I think he should count as notable. All the rankers have been rather awesome and I think both Lero and Yu are really fascinating. Lero is obviously very conflicted and his straightforward earnestness makes it surprising that he survived this long in the tower. As for YU, he’s clearly hiding something and I loves me a troll.

Hatz’s subversion into a really affectionate drunk and his general overall sensibility is a really fun gap. Rachel has been a bit spoiled by fans of the webtoon for me but I’m sure I would otherwise be interested in her as well. Leesoo always rocks and is an amazing connecting element. It’s sort of difficult to pick a stand out character in a plot driven show and so many of them have been carefully developed so they all have something to add to the story. Naturally the main cast as well.

So I guess Yuri. Always want more Yuri after all!

Which stands out to you? I’ve been spoiled by Rachel as well, but she seems like an interesting way to take that character, which I am sure will be explained in a possible season 2. Out of the entire cast, I like Khun and Anak the best. They seem to be the most put together now, and I really dig how Khun, despite some possibly spicy history, is all in on helping Bam do his thing. I’m warmed up to Endorsi a lot too, she’s a spoiled brat, but she seems to have a good head on her shoulders, and I’m hoping she sticks around for a while longer. Finally, I have to agree about Yuri, there is something about her that pulls me in, it’s probably the tsundere design, and for a character who has pretty much been playing literal catch up with the rest of the characters, she’s managed to stick around in my mind.

I won’t lie though, I’ve had to wikipedia a lot of the character names, because a lot of them really haven’t stuck out yet. But like I said before, Tower of God looks like it is just getting started with a lot of them, so I am confident that it is going to change before long.

Since the story clearly isn’t finished and odds are fairly good for a second season at some point, what would you like to see in season 2?

Well this is an anime, so like all anime, the chances of a season 2 are either 100% or not at all. Since Crunchyroll is putting their own money behind it, I’m confident that this isn’t going to be a ‘one and done’ anime series. If they can get their own long running shonen-like series that’s popular, that will mean good numbers and profit for them. I can see them already doing that with The God of High School, but Tower of God has a well ingrained fanbase, so perhaps that will help them.

As always though, it will come down to DVD/Blu ray sales, which remains Judge, Jury and Executioner when it comes to this sort of stuff. Still I have confidence that Tower of God won’t be going anywhere. What do you think?

I was actually asking what you wanted to see in season 2. A season 2 is a safe bet unless there’s a breakdown in the IP negotiations in my opinion.

As for what I would like to see, there’s no real shocker, I would like to see more Yuri. In fact I would like to move away from Bam and co for a bit in order to flesh out the political setting by following around a particularly high ranking Princess of Jahad for a while. I also wouldn’t mind getting a better view of the world “outside” the Tower. Not entirely sure there is one.

Yes, if there is one thing about Tower of God that I think everyone can agree on, it’s that people want to know more about the world. Much of this first season has been a slow tease of bigger events, bigger characters, and bigger stakes, even more so now that the finale has aired. Before we wrapped this up Irina, what did you think about the events of the final two episodes. More specifically, what are your thoughts on Rachel? 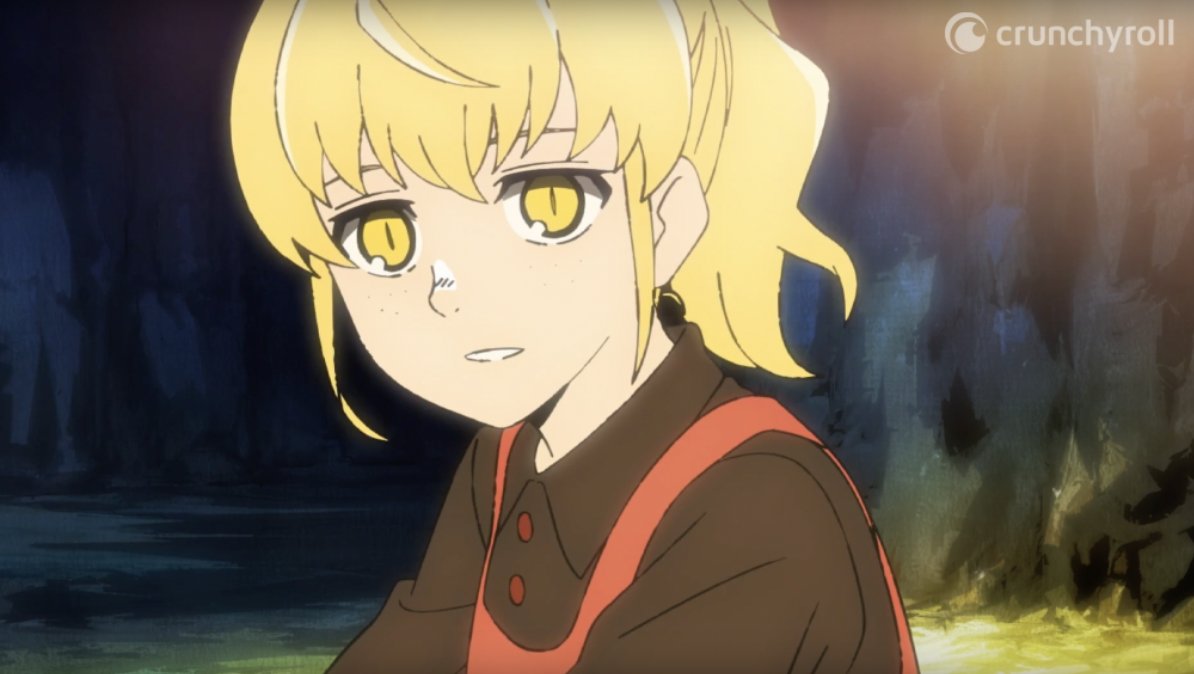 I sort of went into it in a lot of detail in my episode reviews. I don’t really have anything else to say about it. In short my thoughts are, it’s too bad the character was spoiled by readers of the manhwa but then again it was telegraphed so hard that everyone would probably have seen it coming anyways.

I’m pretty fascinated by just how much was orchestrated by Sung and it’s frustrating that we never got to find out. In general, the idea of political strife in a half magical dimension such as the Tower throws everything on its head. Most of these types of Hero vs World tales have the environment work as a monolith. It’s the real antagonist and all that. But if the underlying foundational structure of the Tower itself is shifting, that throws a lot of complexity and changes the tension of the story. It’s great, but we only really got a tiny taste of it in the first season. I hope the focus more on it in a second season.

Like you, I knew about the Rachel twist beforehand, but not the details or why and how it happened. Seeing it now though, really pulls the entire season together and helps make, what at times was an uneven and strange story, make more sense. 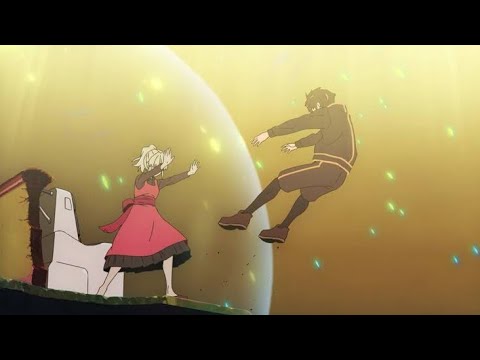 Rachel seems like a different kind of baddy. Not all powerful, not chasing revenge, or some treasure, but jealous. This is a bitter young woman who is angry and upset that she didn’t draw the Ace when it came to life, that someone like Bam, so kind-hearted and open, is lauded with gifts and friends, while she, Rachel, has nothing. That is an interesting motivation, especially because she went to just such great lengths to try and deceive Bam. It really does feel the entire season was leading up to that final episode, and now that Rachel has the rest of the cast twirled around her finger, it is going to be really interesting to see if Bam can pull them out of it.

And honestly, that’s what I think is the big thing with Tower of God up until now. There were reasons to climb the tower, but they weren’t personal and endearing the viewer. Now we have that. Bam wants answers, and we as the viewers want them to. It’s excellent groundwork for a possible second season, or to just get people to read the manhwa.

With that Irina, I think we’ve done a good covering of the series on a macro level. Before we wrap this up, let me ask you. What are your overall thoughts on the series Tower of God?

I enjoyed the series quite a bit and I’m looking forward to a second season. For me, the production more than makes up for narrative details I find less interesting. I actually enjoy the fact that the series avoids too much personal integration. It feels more real and I think it’s great for the pacing. As a plot driven story, it works well.

I think you are on the right track here. I’ve enjoyed Tower of God, but as I said, the entire season feels like its the warm-up act for the real story coming in the second season. The characters are just starting to come into their own, and the major story seems to have a better focus instead of just climbing the tower. If anything, the final episode wants me to continue watching the series, which I think is the best thing the series could do. I do hope if that second is something that will happen, we will be able to sit down and talk shop on the series again!

And that’s all she wrote for this little conversation! I want to thank Irina from I drink and watch anime for taking the time (and patience!) with this little collaboration. It’s always been a goal to sit down and talk anime with my senior blogger, and if for some reason you are reading me, but not her, then please change that at once.